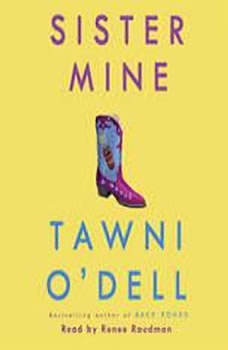 “Tawni O’Dell is a great American storyteller. SISTER MINE is hilarious and poignant; the details glitter like King Coal from a writer who knows it well. This is a story of family, friendship, and how secrets can bury us or redeem us....In the gifted hands of Tawni O’Dell, you can bet on redemption.”
–Adriana Trigiani, author of Home to Big Stone Gap

Shae-Lynn Penrose drives a cab in a town where no one needs a cab–but plenty of people need rides. A former police officer with a closet full of miniskirts, a recklessly sharp tongue, and a tendency to deal with men by either beating them up or taking them to bed, she has spent years carving out a life for herself and her son in Jolly Mount, Pennsylvania, the tiny coal-mining town where she grew up.
Two years ago, five of Shae-Lynn’s miner friends were catapulted to media stardom when they were rescued after surviving four days trapped in a mine. As the men struggle to come to terms with the nightmarish memories of their ordeal, along with the fallout of their short-
lived celebrity, Shae-Lynn finds herself facing harsh realities and reliving bad dreams of her own, including her relationship with her brutal father, her conflicted passion for one of the
miners, and the hidden identity of the man who fathered her son.
When the younger sister she thought was dead arrives on her doorstep, followed closely by a gun-wielding Russian gangster, a shady New York lawyer, and a desperate Connecticut housewife, Shae-Lynn is forced to grapple with the horrible truth she discovers about the life her sister’s been living, and with one ominous question: Will her return result in a monstrous act of greed or one of sacrifice?
Tawni O’Dell’s trademark blend of black humor, tenderness, and a keen sense of place is evident once again as Shae-Lynn takes on past demons and all-too-present dangers.