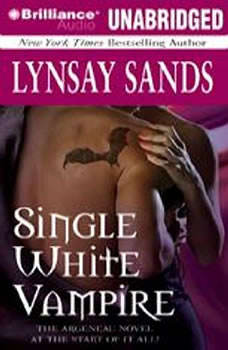 Roundhouse Publishing editor Kate C. Leever’s first letter to her newest legacy author was intended to impress upon him the growing demand for his “vampire romances.” Though he’d expressed little to no desire for publicity, book tours or the like, it was clear that this was a writer waiting to be broken out. Correspondence with Mr. Lucern Argeneau tended to be oddly delayed, but this time his response was quick and succinct. “NO.” But Kate was adamant: Luc was going to attend a romance convention to meet his fans. By hook or by crook, despite his reclusive nature, odd sleep schedule and avoidance of the sun, the surly yet handsome Luc was going to be recognized as the real charmer a nationally bestselling author should be. But soon Kate would learn that his novels were more biographies than bodice rippers, and it’d be her neck on the line. A sweeter surrender, or more heartwarming love story — his own — Luc has yet to write.

The Loving Daylights
by Lynsay Sands

A James Bond-meets-Austin Powers spoof about the gadget maker for a crime-fighting organization run by women. Jane Spyrus likes nothing more than devising new inventions, but even she knows her shrink-wrap prophylactic constraints, spray-on truth s...

I love Lynsay Sands humor. I also find it great that there are moments one can relate to, despite the fact it's a paranormal romance. The Argeneau family is great, and keeps getting better. I wanted a little more of cousin Thomas he's my favorite, because he's the most modern and funny. The condom moment was extremely funny. So funny, that I re-read it later.