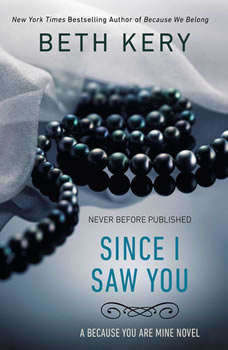 Since I Saw You: A Because You Are Mine Novel

Series: Because You Are Mine #4

In the “exceptionally hot” (USA Today) Because You Are Mine, Beth Kery redefined what’s possible, what’s desirable, and what’s forbidden between a man and a woman. It’s time to go further...

When enigmatic billionaire Ian Noble sets Lin the task of “taming” his brilliant yet half-savage brother Kam Reardon, she eagerly accepts. She’s more than curious about the solitary genius and everything she’s heard about him. During their electric first meeting, her fascination increases a hundredfold. Kam practically oozes raw sex appeal. Lin is interested...very interested. But does her intense attraction and willingness to go places with him she’s never gone before in the bedroom really have to do with Kam? Or is her carefully hidden desire to blame for wanting a man she knows she can never have?

It Happened One Wedding
by Julie James

After a humiliating end to her engagement, investment banker Sidney Sinclair is done with commitment-phobic men. But when her sister winds up engaged after a whirlwind courtship, Sidney is thrown into close contact with exactly the kind of sexy play...

Taking It All
by Maya Banks

The new blazing hot trilogy by the author of the #1 New York Times bestselling phenomenon The Breathless Trilogy"Maya Banks…I'm ready for the next ride now!" said USA Today. And now, Maya Banks is ready to deliver. From the "must-read author" ...

The Cinderella Deal
by Jennifer Crusie

Linc Blaise needed the perfect fiancee to win his dream job, but finding a woman who'd be convincing in a charade seemed impossible-until he heard Daisy Flattery charm her way out of a sticky situation. Playing the prim and proper bride-to-be was a ...

When You Dare
by Lori Foster

Because You Are Mine Bundle

When I'm with You
Because You Are Mine #2

Because We Belong
Because You Are Mine #3