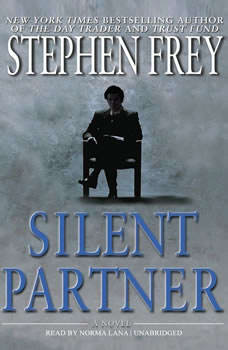 In the world of high finance, it's all about risk and return. With big risks come big rewards ... and even bigger dangers. And no one knows this better than Stephen Frey. From the New York Times bestselling author of Trust Fund and The Day Trader comes an electrifying new thriller of money, mayhem, and murder.Angela Day has survived a rough past-from a hard-scrabble childhood scarred by the tragic deaths of her father and best friend to losing custody of her only child to her adulterous ex-husband and his powerful family. But despite it all, at thirty-one, she's carved out a good career with Sumter Bank, one of Richmond's most venerable institutions. And now, summoned under mysterious circumstances to meet one of the world's richest entrepreneurs, it looks as if Angela may be on the threshold of a brighter future."If you help me, I'll help you." This is Jake Lawrence's offer to Angela. A stockholder in Sumter Bank, the reclusive multibillionaire is planning a takeover of a hot, new company-and he wants Angela to apply her considerable skills and charms to make sure it all goes smoothly ... and secretly. In exchange, Lawrence promises to use his formidable influence to permanently reunite Angela with her son.For Angela, it's the one reward for which she would risk everything. And accepting Jake Lawrence's deal will mean doing just that, as his mind-boggling wealth and power come with the ultimate price tag: enemies everywhere have marked him for death. And anyone close to him is fair game.Now, as Angela prepares to broker the deal of her career, she's stalked by foes on every front. Then, after stumbling on evidence of an insidious conspiracy within her own company, she becomes a target for termination. Armed with the most volatile kind of inside information, Angela has the power to bring the dirtiest players down from the highest places. But they have the power to strike first-at the one thing most precious to Angela.Silent Partner reaffirms Stephen Frey's reputation as a master of page-turning suspense in the world of big-money movers and shakers, where everyone has a price, and there's more than one way to make a killing.