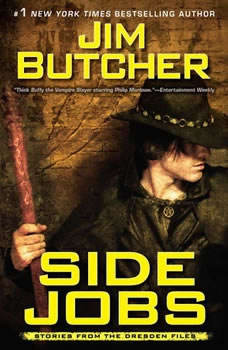 Side Jobs: Stories From the Dresden Files

New in the Blacktop Cowboy series.

Here, together for the first time, are the shorter works of #1 New York Times bestselling author Jim Butcher-a compendium of cases that Harry and his cadre of allies managed to close in record time. The tales range from the deadly serious to the absurdly hilarious. Also included is a novella exclusive to this collection that takes place after the cliff-hanger ending of the April 2010 hardcover, Changes. This is a must-have collection for every devoted Harry Dresden fan as well as a perfect introduction for readers ready to meet Chicago's only professional wizard.

Pretty nifty that a couple of the stories were as told by characters other than Dresden. Basically a requirement for the final one as it was set shortly after his murder in the prior book. Since he doesnt seem to plan to end the series, Im very curious to see how he works around killing off the hero in the next one. Then again, we do have several varieties of vampires populating Dresdens world. Surely, Butcher wont go there. Im counting on him to be more creative than THAT.

Side Jobs: Stories From the Dresden...
Dresden Files