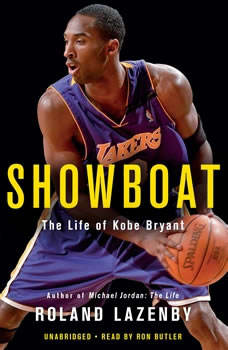 Showboat: The Life of Kobe Bryant

The definitive portrait of Kobe Bryant, from the author of Michael Jordan. "Lazenby's detailed research and fantastic writing paint a complex, engaging picture of one of the NBA's greats." (Kurt Helin, Pro Basketball Talk, NBC Sports) Eighteen-time All-Star, scorer of 81 points in a single game, MVP, and one of the best shooting guards in NBA league history: Kobe Bryant is among basketball's absolute greatest players, and his importance to the sport is undeniable. Third on the NBA career scoring list and owner of five championship rings, he is an undisputed all-time great, one deserving of this deep and definitive biography. Even within the flashiest franchise in all of sports--the Los Angeles Lakers, where he played his entire career--Bryant always took center stage, and his final game captivated the basketball world, indeed the country. Roland Lazenby delves deep to look behind this public image, using classic basketball reporting and dozens of new interviews to reveal the whole picture, from Bryant's childhood through his playing years. Showboat is filled with large personalities and provocative stories, including details of Bryant's complicated personal life and explosive relationships on the court, and is a riveting and essential read for every hoops fan.