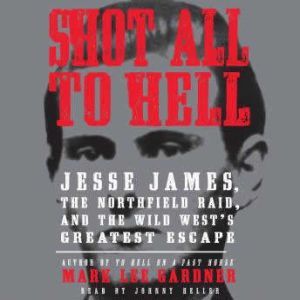 Shot All to Hell: Jesse James, the Northfield Raid, and the Wild West's Greatest Escape

It was the most famous bank robbery of all time, involving the legendary James-Younger gang's final shocking holdup—the infamous Northfield Raid—and the thrilling two-week chase that followed. Mark Lee Gardner, author of the critically acclaimed To Hell on a Fast Horse, takes us inside Northfield's First National Bank and outside to the streets as Jesse James and his band of outlaws square off against the heroic citizens who risked their lives to defeat America's most daring criminals. With vivid detail and novelistic verve, Gardner follows the James brothers as they elude both the authorities and the furious citizen posses hell-bent on capturing them in one of the largest manhunts in the history of the United States. He reveals the serendipitous endings of the Younger brothers—Cole, Jim, and Bob—and explores the James brothers' fates after the dust settled, solving mysteries about the raid that have been hotly debated for more than 130 years.A galloping true tale of frontier justice featuring audacious outlaws and intrepid heroes, Shot All to Hell is a riveting slice of Wild West history that continues to fascinate today.