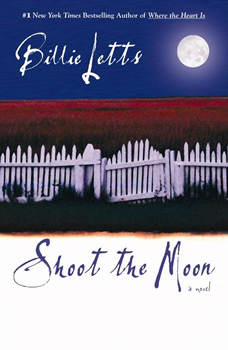 In 1972, the town of DeClare, Oklahoma, was consumed by the terrifying murder of Gaylene Harjo and the disappearance of her baby, Nicky Jack. When the child's pajama bottoms were found on the banks of Willow Creek, everyone feared Nicky Jack was dead, although his body was never found.Nearly 30 years later, Nicky Jack mysteriously returns to DeClare. His sudden reappearance will stun the people of DeClare and stir up long-buried emotions and memories. But what Nicky Jack discovers among the people who remember the night he vanished is far more than he, or anyone, bargains for. Piece by piece, what emerges is a story of dashed hopes, desperate love, and a shocking act with repercussions that will cry out for justice...and redemption.Full of the authentic heartland characters that Billie Letts writes about so beautifully, Shoot the Moon is a hypnotic tale filled with suspense and emotional truth. It further establishes Billie Letts as an American writer to be reckoned with, an original storyteller whose words go straight to our heart.