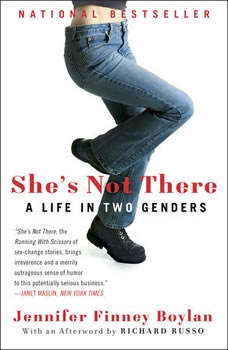 She's Not There: A Life in Two Genders


The provocative bestseller She’s Not There is the winning, utterly surprising story of a person changing genders. By turns hilarious and deeply moving, Jennifer Finney Boylan explores the territory that lies between men and women, examines changing friendships, and rejoices in the redeeming power of family. Told in Boylan’s fresh voice, She’s Not There is about a person bearing and finally revealing a complex secret. Through her clear eyes, She’s Not There provides a new window on the confounding process of accepting our true selves.


“Probably no book I’ve read in recent years has made me so question my basic assumptions about both the centrality and the permeability of gender, and made me recognize myself in a situation I’ve never known and have never faced . . . The universality of the astonishingly uncommon: that’s the trick of She’s Not There. And with laughs, too. What a good book.” —Anna Quindlen, from the Introduction to the Book-of-the-Month-Club edition.

Autobiography of a Fat Bride
by Laurie Notaro

In Autobiography of a Fat Bride, Laurie Notaro tries painfully to make the transition from all-night partyer and bar-stool regular to mortgagee with plumbing problems and no air conditioning. Laurie finds grown-up life just as harrowing as her reckl...

Welcome to the hilarious, strange, elegiac, outrageous world of David Sedaris. In Naked, Sedaris turns the current mania for the memoir on its proverbial ear, mining the exceedingly rich terrain of his life, his family, and his unique worldview, a ...

From the number-one bestselling author of Running with Scissors and Dry comes Augusten Burroughs's most eagerly anticipated collection yet: true stories that give voice to the thoughts that we all have but dare not mention.It begins with a Tang Inst...

I Love Everybody (and Other Atrocious Lies)
by Laurie Notaro

Laurie Notaro is married, mortgaged, and now—miraculously—employed in the corporate world, discovering that bosses come in all shapes, sizes, and degrees of mental stability. After maxing out her last good credit card at Banana Republic,...