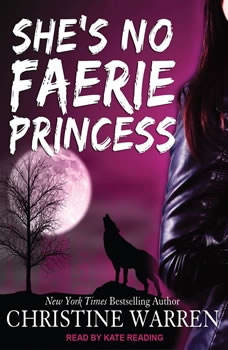 Queen Mab's niece, Fiona, has long been bored to tears by the intrigues of Court life. She'd prefer to cut loose at a punk club, knock back a few Thai beers, and hook up with a likely lad of similar interests. But when Fiona goes AWOL, she only gets as far as Manhattan's Inwood Park before a nasty demon nearly puts a permanent crimp in her plans—and a dark stranger sparks her desire. All work and no play make Tobias Walker one cranky werewolf. After six months of doing his part to keep the peace during the delicate negotiations between the Others and humankind, he'd like nothing more than a good night's sleep—preceded by an enthusiastic mating session. The alluring woman he rescues in the park might be the answer to his most lustful prayers, but only if they can both stay alive long enough to find out who wants her dead and why. Now, Fiona and Tobias must unravel a tangled web of treachery that spans branches of the Fae, Other, and mortal worlds, all the while falling into a dangerous attraction that could be the beginning of a beautiful friendship—or the end for them both.

She's No Faerie Princess
Others #2

Wolf at the Door
Others #1

The Demon You Know
Others #3