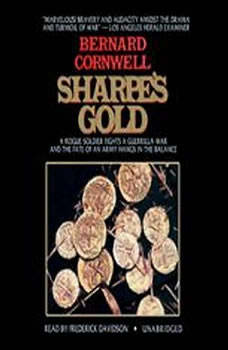 Sharpes Gold: Richard Sharpe and the Destruction of Almeida, August 1810

Only a year after its stunning victory at Talavera in July of 1809, Wellingtons Peninsular armyvastly outnumbered, its coffers emptyis on the brink of collapse. The Spanish government has fallen, and the last Spanish armies have been crushed by the French. But Wellington has one hope left: in the dangerous Portuguese hills lies a fortune in gold, enough gold perhaps to turn the Peninsular War around. And he knows of one fighting man capable of stealing it: Captain Richard Sharpe of the South Essex Regiment.

This installment in the bestselling historical fiction series takes the charismatic Richard Sharpe all the way from Talavera (Sharpes Eagle) to the glory of Waterloo, on a secret mission that is unlike any form of warfare Sharpe has known in his long and embattled career as a soldier fighting his way up through the ranks.