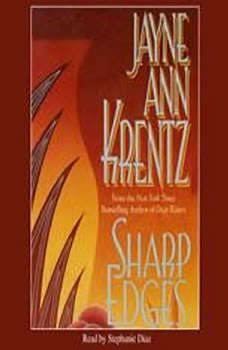 Eugenia Swift is a young woman of singular sensibilities, a connoisseur of beauty...and naturally inclined to tackle even the most difficult tasks on her own. As the director of the Leabrook Glass Museum, she's been asked to travel to Frog Cove Island—an artistic have near Seattle—to catalog an important collection of art glass belonging to the late Adams Daventry. But thanks to unsavory rumors surrounding Daventry's death, the museum insists that Eugenia take along Cyrus Chandler Colfax—a rough-hewn private investigator whose taste in glass runs to icy cold bottles filled with beer.When Colfax declares they must pose as a couple, Eugenia protests in terms as loud as his Hawaiian shirts. She's loath to disclose the secret purpose of her trip: investigating the disappearance of her good friend Nellie Grant...the late Adam Daventry's lover. Meanwhile, the green-eyed calm of Colfax's gaze shields his own hidden agenda—locating a priceless Daventry treasure that will help him avenge an old wrong.While Eugenia has always kept her heart on a shelf, their very lives soon depend on making an utterly convincing couple. Because among the chic galleries of Frog Cove Island lurks a killer, and their only chance for survival is the boldest, most artful collaboration they can dare to imagine.At once a fascinating look at today's avant-garde art world and a scintillating adventure, Sharp Edges hums with the energy of a couple who bring to mind a thoroughly modern Bogart and Bacall. Add deft displays of wit and a wicked twist, and you've got another winner from Jayne Ann Krentz!

They died with smiles on their faces. Three apparent suicides: a brilliant engineer, an infamous lawyer, and a controversial politician. Three strangers with nothing in common - and no obvious reasons for killing themselves. Police lieutenant Eve Da...

The Blessing
by Jude Deveraux

When wealthy, hard-driving corporate genius Jason Wilding reluctantly takes a break from his business and his husband-hunting girlfriends for a Christmas visit to his hometown in Abernathy, Kentucky, he has no idea what his physician brother, David,...