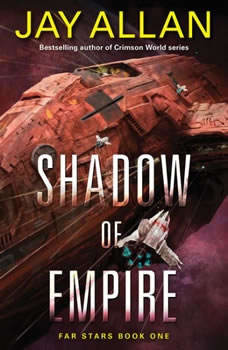 The first installment in the Far Star series, a swashbuckling space saga that introduces the daring pirate Blackhawk and the loyal crew of the Wolf’s Claw, from Jay Allan, the author of the bestselling Crimson Worlds saga.Smuggler and mercenary Arkarin Blackhawk and the crew of the ship Wolf’s Claw are freelance adventurers who live on the fringe of human society in the Far Stars. A veteran fighter as deadly with a blade as he is with a gun, Blackhawk is a man haunted by a dark past. Even his cynicism cannot banish the guilt and pain that threaten his sanity.Sent to rescue the kidnapped daughter of his longtime friend Marshal Augustin Lucerne, Blackhawk and his crew find themselves drawn into one deadly fight after another. When the Wolf’s Claw is damaged, they are forced to land on a remote planet subsumed by civil war. Pulled unwittingly into the conflict, they uncover disturbing information about secret imperial involvement that could upset the plans of Lucerne.For the Marshal is determined to forge a Far Stars Confederation powerful enough to eliminate all imperial influence and threats in the sector. He needs a skilled warrior like Blackhawk on his side, but the mercenary, plagued by dark memories from the past, refuses to join the cause. All too soon, though, he and his crew will have to take a stand.