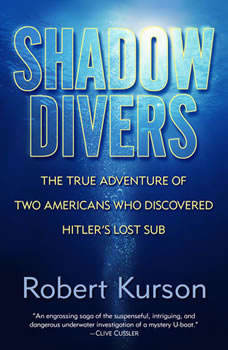 Shadow Divers: The True Adventure of Two Americans Who Risked Everything to Solve One of the Last Mysteries of World War II

In 1991, acting on a tip from a local fisherman, two scuba divers discovered a sunken German U-boat–complete with its crew of 60 men–not too far off the New Jersey coast. The divers, realizing the momentousness of their discovery, began probing the mystery. Over the next six years, they became expert and well-traveled researchers, taught themselves German, hunted for clues in Germany, and constructed theories corrective of the history books, all in an effort to identify this sunken U-boat and its crew. During that time, three of their colleagues died exploring the wreck, including a father and son team. In 1997, when it all seemed in vain, the two divers came up with a final plan, so dangerous that the book ends with this last dive.

If you like diving and WW2 stories you will love this.

I don't know why but I LOVE reading stories about submarines and undersea exploration--even tho' I can't look at the pictures. The thing is, I'm phobic about deep water and drowning, and have been since I was a very little girl. I think that's because I didn't learn to swim until I was 14. But I still read Ballard's book about finding the Titanic, and Shadow Divers was just as exciting. I really enjoyed listening to all the history of Germany's U-boats and the re-enactment of the last days of the crew of U-869, all of which gave faces and being to the shadows of the dead that Chatterton and Kohler found onboard the sub, and I loved following the detective work that helped lead to identifying the U-Who. An excellent book for anyone who enjoys a good mystery, history, and adventure, all wrapped up in the same story. And if you want a thrill, check out the artist's drawing of the U-869 at Kurson's website that's EXACTLY the kind of illustration that terrifies me!