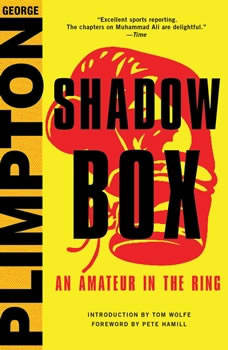 Shadow Box: An Amateur in the Ring

George Plimpton makes his riskiest foray into participatory journalism--stepping into the ring against a champion boxer--in SHADOW BOX, now repackaged and including never-before-seen content from the Plimpton archives.Stepping into the ring against light-heavyweight champion Archie Moore, George Plimpton pauses to wonder what ever induced him to become a participatory journalist. Bloodied but unbowed, he holds his own in the bout--and lives to tell, in this timeless book on boxing and its devotees, among them Ali, Joe Frazier, Ernest Hemingway, and Norman Mailer. SHADOW BOX is one of Plimpton's most engaging studies of professional sport, told through the eyes of an inquisitive and astute amateur. From the gym, the locker room, ringside, and even in the harsh glare of the ring itself, Plimpton documents what it is like to be a boxer, an artist of mayhem.

Out of My League
by George Plimpton

The baseball classic that Ernest Hemingway called "beautifully observed and incredibly conceived," now recorded and including a foreword from Jane Leavy.The first of Plimpton's remarkable forays into participatory journalism, OUT OF MY LEAGUE chron...

The Murder of Sonny Liston
by Shaun Assael

On January 5, 1971, Sonny Liston was found dead in his home-of an apparent heroin overdose. But no one close to Liston believed that his death was accidental. Digging deep into a life that Liston tried hard to hide, Shaun Assael treats the boxer's d...

The book that made a legend--and capture's America's sport in detail that's never been matched, now featuring a foreword by Nicholas Dawidoff a and never-before-seen content from the Plimpton Archives. George Plimpton was perhaps best known for PAP...

The Fight
by Norman Mailer

In 1974 in Kinshasa, Zaïre, two African American boxers were paid five million dollars apiece to fight each other. One was Muhammad Ali, the aging but irrepressible “professor of boxing.” The other was George Foreman, who was as tac...

An insightful portrait of Muhammad Ali from the New York Times bestselling author of At the Altar of Speed and The Big Bam. It centers on the cultural and political implications of Ali's refusal of service in the military—and the key moments i...

Stripping away the revisionism to reveal the true nature of the man himself, this new book recounts the life journey of a fighter universally recognized as a unique and treasured world icon. Few global personalities have commanded an all-encompassi...

Boxing and the Mob
by Jeffrey Sussman

More than any other sport, boxing has a history of being easy to rig. There are only two athletes and one or both may be induced to accept a bribe; if not the fighters, then the judges or referee might be swayed. In such inviting circumstances, the ...

A bare-knuckled, tell-all memoir from Mike Tyson, the onetime heavyweight champion of the world—and a legend both in and out of the ring. Philosopher, Broadway headliner, fighter, felon—Mike Tyson has defied stereotypes, expectation...

The Boxing Kings
by Paul Beston

For much of the twentieth century, boxing was one of America's most popular sports and the heavyweight champions were figures known to all. Boxing fans, sports historians, and those interested in U.S. race relations as it intersects with sports will...