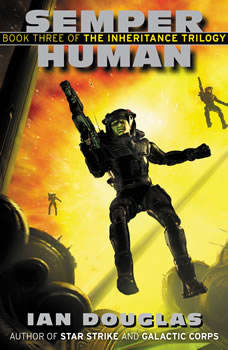 After 850 years of voluntary cybe-hibe, General Garroway and his marines have been called back into action, to once again battle their ancient, deadly foe, the Xul. But after hundreds of centuries, there have been significant changes in technology, society, and human culture, so much so that the rules of engagement Marines have lived and died by for thousands of years are now obsolete.

Garroway doesn’t have time for politics and silly games though. The Xul have been quietly seeking out the ultimate human weakness that will forever render them useless against the Xul forces-emotion. They are slowly but surely rewriting history to demoralize the Marines and humans throughout the galaxy. And if they succeed, no one will even want to fight them.

In the final explosive chapter of the Inheritance Trilogy, it’s a race against the clock as Garroway must stop the Xul once and for all to keep them from destroying all trace of human existence.