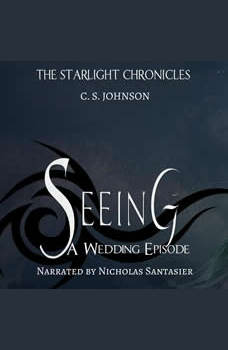 Seeing: A Wedding Episode of the Starlight Chronicles: An Epic Fantasy Adventure Series

Hamilton Dinger is not having a good summer. Since his battle with Orpheus and Starry Knight, he has felt distracted. Not with important things, or anything, really. Just work and video games and sleeping in during the summer.

When Elysian forces him out of the house, Hamilton heads out for Rachel’s, only to find out it is closed for her wedding. Hamilton is relieved, and then concerned, as a new demon gets ready to attack the ceremony.

Can he save Rachel’s big day without letting his anger toward Starry Knight get in the way?

This is a short story set between Book 3 and Book 4 of The Starlight Chronicles from C. S. Johnson.

Seeing: A Wedding Episode of the St...
The Starlight Chronicles