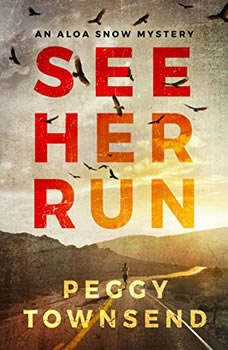 “Journalist Peggy Townsend’s superb debut delivers an intense character study…Townsend’s sophisticated plotting and affinity for character development elevate See Her Run.” —Associated PressA former reporter for the Los Angeles Times, Aloa Snow knows what it means to be down and out. Once highly respected, she’s now blackballed, in debt, and dealing with the echoes of an eating disorder. Until she gets one more shot to prove that she has what it takes—with a story some would die for…After the body of a promising young athlete, Hayley Poole, is recovered in the Nevada desert, authorities rule it a suicide. But when Aloa discovers that the girl’s boyfriend died in a similar accident only months before, her investigative instincts are on high alert. It turns out the girl was on the run from secrets that could kill.This case is murder for Aloa, and Hayley won’t be the last one to suffer. Someone very powerful forced Hayley to run for her life. Now Aloa must do the same.