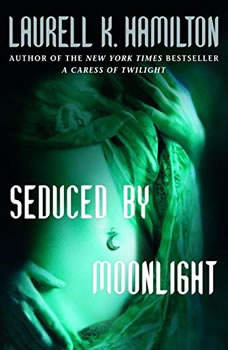 I am Meredith Gentry, P.I. and Princess Merry, heir to the throne of Faerie. Now there are those among us who whisper I am more. And who can blame them? I've awakened the dazzling magic that's slumbered in them for thousands of years. But the thing is, I can't figure out why.My aunt, Queen of Air and Darkness, is no longer distracted by her sadistic hobbies. Her obsession has turned unwaveringly to me. The mission to get me pregnant and beat my cousin Prince Cel to the crown is taking longer than expected. Even though I spend each night with the Queen's Ravens, my immortal guards, no child has come of our decadent pleasures. But something else is happening. My magic courses through me uncontrollably. And as I lock my half-mortal body with their full-Sidhe-blooded ones, the power surges like never before.It all began with a chalice. I dreamed of it, and it appeared, cool and hard, beside me when I awoke. My guards know the ancient relic well—its disappearance ages ago stripped them of all of their vital powers. But it is here with us now. My touch resonates with its force, and they're consumed with it, their Sidhe essences lit up by it. But even as they cherish me for this unexpected gift, there are those who loathe me for it. Me, a mongrel, only half fey and part mortal. The Unseelie court has suffered for so long, and there are some who would not have it weakened further by an impure queen. My enemies grow in number every day. But they do not know what I am capable of. Nor, for that matter, do I.…

The reader changes the pronunciation of various names in this book. Of particular note was Doyle to Dole... I dont know how it is spelled in the books but the change was so jarring that it took me a few minutes to realize it wasnt a new character. The queen changes too but her name is unusual enough that it was obvious. These update or improved pronunciations dont add to the story at all. I dont feel more or less immersed hearing Dole vs Doyle but I do take quite some time to rewire my head to think of it as the same person and not be annoyed at the reader. I dropped 2 stars for this because it detracts from it that much for me.