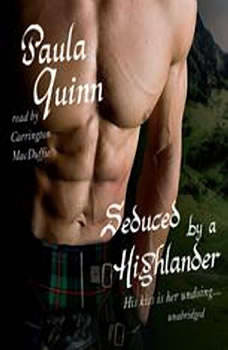 Seduced by a Highlander: The Children of the Mist Series, Book 2

Tristan MacGregor is famed throughout the Highlands as a silvertongued seducer and an unrepentant rogue. Bold and charming, hes dallied with many women, yet none as mysterious as the lass he steals a kiss from at kings court. Little does he know this beauty is one of his clans greatest enemies. Isobel Fergusson has despised the bloodthirsty MacGregors ever since they murdered her father. Shes horrified to learn that the handsome stranger she kissed is of this clan. But Tristan means to possess her at any cost, and Isobels body turns traitor at his touch. Can a man shes sworn to hate be the only one she can ever love?

Captured by the Highlander
by Julianne MacLean

Lady Amelia Templeton would rather die than surrender to a man like Duncan MacLean. He is the fiercest warrior of his clan—her people's sworn enemy—and tonight he is standing over her bed. Eyes blazing, muscles taut, and battle axe gleam...

The Leopard Prince
by Elizabeth Hoyt

THE ONE THING A LADY MUST NEVER DO...Wealthy Lady Georgina Maitland doesn't want a husband, though she could use a good steward to run her estates. One look at Harry Pye, and Georgina knows she's not just dealing with a servant, but a man.IS FALL I...

From New York Times bestselling author of The Husband Hunt, The Heiress, and other beloved historical romances, comes Lynsay Sands’s An English Bride in Scotland, the first book in a new series set in the wilds of the Highlands. Annabel ...