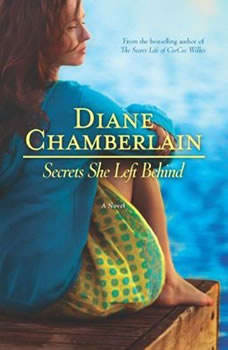 Secrets She Left Behind

The sudden disappearance of Sara Weston is a mystery to her seventeen-year-old son, Keith. A survivor of an arson fire, Keith is still healing, and in Sara's absence, he must face a challenging situation alone: the release of his half-sister, Maggie, from prison. Maggie, who was partially responsible for the fire, is the handiest target for Keith's rage. Reintegration into the outside world proves difficult for Maggie, even beyond dealing with Keith and her guilt. Somehow the two must find a way to overcome the past because Maggie and her family may be all Keith has left.

The Good Father
by Diane Chamberlain

Four years ago, nineteen-year-old Travis Brown made a choice: to raise his newborn daughter on his own. While most of his friends were out partying and meeting girls, Travis was at home, changing diapers and worrying about keeping food on the table....

At a New England boarding school, a sex scandal is about to break. Even more shocking than the sexual acts themselves is the fact that they were caught on videotape. A Pandora's box of revelations, the tape triggers a chorus of voices--those of the ...

Her Mother's Shadow
by Diane Chamberlain

Annie: A loving mother and wife, Annie O'Neill was the heart of the small community of Kiss River. But her generous nature hid a darker side that remained secret for years after her tragic death. Lacey: When Lacey O'Neill finally learns the shatter...

The Midwife's Confession
by Diane Chamberlain

Dear Anna, What I have to tell you is difficult to write, but I know it will be far more difficult for you to hear, and I'm so sorry . . . The unfinished letter is the only clue Tara and Emerson have to the reason behind their close friend Noelle...

Light on Snow
by Anita Shreve

What makes a family? That's what twelve-year-old Nicky Dillon wonders after she and her widowed father discover a wailing, abandoned baby in the snow-filled woods near their New Hampshire home. Through the days that follow, the Dillons face a thicke...