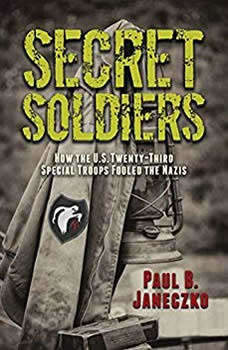 What do set design, sound effects, and showmanship have to do with winning World War II? Meet the Ghost Army that played a surprising role in helping to deceive — and defeat — the Nazis.In his third book about deception during war, Paul B. Janeczko focuses his lens on World War II and the operations carried out by the Twenty-Third Headquarters Special Troops, aka the Ghost Army. This remarkable unit included actors, camouflage experts, sound engineers, painters, and set designers who used their skills to secretly and systematically replace fighting units — fooling the Nazi army into believing what their eyes and ears told them, even though the sights and sounds of tanks and war machines and troops were entirely fabricated. Follow the Twenty-Third into Europe as they play a dangerous game of enticing the German army into making battlefield mistakes by using sonic deceptions, inflatable tanks, pyrotechnics, and camouflage in more than twenty operations. From the Normandy invasion to the crossing of the Rhine River, the men of the Ghost Army — several of whom went on to become famous artists and designers after the war — played an improbable role in the Allied victory.

Flowers in the Gutter
by K. R. Gaddy

The true story of the Edelweiss Pirates, working-class teenagers who fought the Nazis by whatever means they could. Fritz, Gertrud, and Jean were classic outsiders: their clothes were different, their music was rebellious, and they weren&r...

In this extraordinary and harrowing memoir, follow one GI’s tour of duty as Ryan Smithson brings readers inside a world that few understand. This is no ordinary teenager’s story. Instead of opting for college life, Ryan Smithson joined ...

Double Cross
by Paul B. Janeczko

How does deception factor into fighting wars, and is it effective? In an intriguing companion to The Dark Game, Paul B. Janeczko reveals the truth about the strategic lies of war.The biblical account of Gideon. The ancient story of the Trojan horse....

A Thousand Sisters
by Elizabeth Wein

The gripping true story of the only women to fly in combat in World War II—from Elizabeth Wein, award-winning author of Code Name Verity.In the early years of World War II, Josef Stalin issued an order that made the Soviet Union the first cou...

The Dark Game
by Paul B. Janeczko

Finalist for the YALSA Award for Excellence in Nonfiction for Young Adults! From clothesline codes to surveillance satellites and cyber espionage, Paul B. Janeczko uncovers two centuries’ worth of true spy stories in U.S. history. (Ages 12 and...

"That Others May Live" is a mantra that defines the fearless men of Alaska's 212th Pararescue Unit, the PJs, one of the most elite military forces on the planet. Whether they are rescuing citizens injured and freezing in the Alaskan wilderness or sa...

For fans of sea battles, adventures, and war stories like Unbroken, this is the incredible true story of a boy who helps to bring closure to the survivors of the tragic sinking of the USS Indianapolis, and helps exonerate the ship's captain fifty ye...

The Dark Game
by Paul B. Janeczko

Finalist for the YALSA Award for Excellence in Nonfiction for Young Adults! From clothesline codes to surveillance satellites and cyber espionage, Paul B. Janeczko uncovers two centuries’ worth of true spy stories in U.S. history. (Ages 12 and...