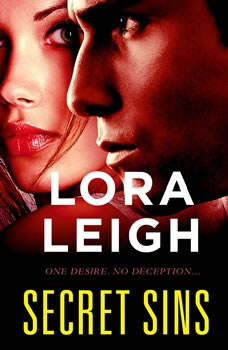 Secret SinsLora LeighSheriff Archer Tobias has watched the Callahan family struggle to find peace and acceptance in the community—despite the murders that continue to haunt them. But his darkest suspicions grow worse when Anna Corbin, a member of one of the country's most influential families, becomes the next target…Anna knows she's in danger. She knows she's on a trail of secrets and lies that could lead to a dead end. But no matter what, she's determined to learn the identity of the killer—even if it's someone she loves…Torn between duty and desire, Sheriff Tobias cannot allow Anna to put herself in the path of a deranged murderer. But as the investigation pulls them closer together—and deeper into the nightmare—he realizes that he cannot save her from this legacy of blood and vengeance…without putting his own life on the line.

I tried. I really, really tried. Her last two books in this series were meandering, horribly edited and just plain made no sense at times. Didnt even finish them, they were wallbangers. But I have a weakness for Lora Leigh. She was the first. So I thought Id give her one more shot.OMG. Really. The plot again is meandering and not making sense at points. The characters do things that seem completely at odds with how they were originally presented. But the final straw? At the bottom of page 210 is the EXACT SAME DIALOGUE that was at the bottom of page 137. I know theres only so many ways you can say Do me, baby Oh, Im gonna do you, baby but to repeat the exact same dialogue twice in the same book, spoken by the same characters? Shes either phoning them in or her editors get too worked up reading her stuff to actually edit. What really made me laugh, though, was the line at the bottom of page 210, after the duplicate dialogue: It was almost like deja vu...More like farewell to a once great author.