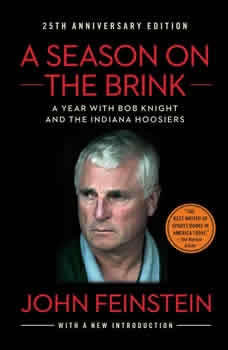 Season on the Brink

Twenty-five years after it spent sixteen weeks atop the New York Times bestseller list, A Season on the Brink remains the most celebrated basketball book ever written. Granted unprecedented access to legendary coach Bob Knight and the Indiana Hoosiers during the 1985-86 season, John Feinstein saw and heard it all-practices, team meetings, strategy sessions, and midgame huddles-as the team worked to return to championship form. The result is an unforgettable chronicle that not only captures the drama and pressure of big-time college basketball but also paints a vivid portrait of a complex, brilliant coach as he walks the fine line between genius and madness.

They were the Beatles of basketball, the Mercury Seven in sneakers. In Dream Team, acclaimed sports journalist Jack McCallum delivers the untold story of the greatest team ever assembled: the 1992 U.S. Olympic men's basketball team that captiva...

The Blueprint
by Jason Lloyd

June 19, 2016: the greatest moment in Cleveland sports history, when the Cleveland Cavaliers won the NBA Finals and broke the Cleveland Curse. It was the triumph fans had been waiting fifty-two years for, and it wasn’t easy to get there—...

Basketball team building is the ultimate challenge at the NBA level and the last few years have seen a massive change in the amount of money, technology, and approaches to finding and evaluating players. This process starts at the high school level...

The popular ESPN basketball analyst and former Duke player looks at the true meaning of toughness. If anyone knows tough, it's Jay Bilas. A four-year starter at Duke, he learned an incomparable work ethic under coach Mike Krzyzewski, battling again...

When the Game Was Ours
by Larry Bird

From the moment these two legendary players took the court on opposing sides, they engaged in a fierce physical and psychological battle. In Celtic green was Larry Bird, the hick from French Lick with laser-beam focus, relentless determination, and ...

The most outspoken and combative coach in NBA history—and one of the most successful, amassing more than 1,175 victories, the sixth best winning record ever—reflects on his life, his career, and his battles on and off the basketball cour...

Now a New York Times bestseller! The inside story of LeBron James's return and ultimate triumph in Cleveland.What really happened when LeBron James stunned the NBA by leaving a potential dynasty in Miami to come home to play with the Cleveland Cava...

Don't Put Me In, Coach
by Mark Titus

An irreverent, hilarious insider's look at big-time NCAA basketball, through the eyes of the nation's most famous benchwarmer and author of the popular blog ClubTrillion.com (3.6m visits!). Mark Titus holds the Ohio State record for career wins, and...