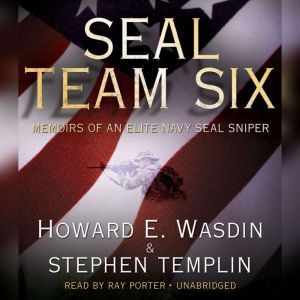 A book that takes you inside SEAL Team Six—the covert squad that killed Osama bin Laden When the navy sends their elite, they send the SEALs. When the SEALs send their elite, they send SEAL Team Six—a secret unit tasked with counterterrorism, hostage rescue, and counterinsurgency. In this dramatic, behind-the-scenes chronicle, Howard Wasdin takes readers deep inside the world of navy SEALs and Special Forces snipers, beginning with the grueling selection process of Basic Underwater Demolition/SEAL—the toughest and longest military training in the world. After graduating, Wasdin faced new challenges. First, there was combat in Operation Desert Storm as a member of SEAL Team Two. Then, the Green Course: the selection process to join the legendary SEAL Team Six (ST6), with a curriculum that included practiced land warfare to unarmed combat. More than learning how to pick a lock, they learned how to blow the door off its hinges. Finally, as member of ST6, he graduated from the most storied and challenging sniper program in the country: the Marine Corps Scout Sniper School. Eventually, of the eighteen snipers in ST6, Wasdin became the best—which meant one of the best snipers on the planet. Less than half a year after sniper school, he was fighting for his life. The mission: capture or kill Somalian warlord Mohamed Farrah Aidid. From rooftops, helicopters, and alleys, Wasdin hunted Aidid and killed his men whenever possible. But everything went quickly to hell when his small band of soldiers found themselves fighting for their lives, cut off from help and desperately trying to rescue downed comrades during a routine mission. The Battle of Mogadishu, as it became known, left eighteen American soldiers dead and seventy-three wounded. Howard Wasdin had both of his legs nearly blown off while engaging the enemy. His explosive combat tales and inside details of becoming one of the world’s deadliest snipers combine to make this the most thrilling and important memoir by a navy SEAL since Lone Survivor. A New York Times bestseller. ABarnes & Noble Best Book: Top 100 Bestseller of 2011. AUSA Today bestsellerUSA Today bestseller. AWall Street Journal bestsellerWall Street Journal bestseller. ALos Angeles Times bestsellerLos Angeles Times bestseller. ABoston Globe bestsellerBoston Globe bestseller. AWashington Post bestsellerWashington Post bestseller. APublishers Weekly bestsellerPublishers Weekly bestseller.