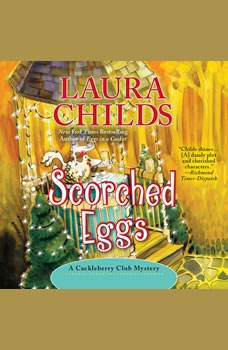 Getting her hair colored at Root 66, Suzanne is stunned to witness the County Services office next door suddenly go up in flames. Sadly, the fire claims the life of longtime civil-service workerand friend to the Cackleberry ClubHannah Venable. When its discovered that an accelerant was used to fan the flames, Suzanne, Petra, and Toni vow to smoke out the culprit. When Suzanne finds a possible connection between the fire and the nearby Prairie Star Casino, she comes to realize that the arsonist wanted something very big and bad kept secret. And if the ladies arent careful, they may be the ones gambling with their lives.

Theodosia Browning’s dear friend, Delaine Dish, has asked her to be a bridesmaid for her wedding. But when the big day arrives, everything seems to be going wrong. First, a massive storm is brewing over Charleston. A bad omen? Second, Delaine&...

Steeped in Evil
by Laura Childs

Indigo Tea Shop owner Theodosia Browning heads to a winery where she is about to learn the true meaning of terroirÂSteeped in Evil  Theodosia has never considered herself a wine connoisseur-tea has always beenÂwell, her cup of tea. But th...

Louisiana businessman Jerry Earl Leland served only a fraction of his five-year sentence for white-collar crime, thanks to some political connections and a few greased palms. But he won't have long to enjoy his freedom... After Jerry Earl's early re...

Eggs in a Casket
by Laura Childs

When the creepy ex-prison warden is found dead in someone else's freshly dug grave, the Cackleberry Club must unscramble the clues and find the true culprit.