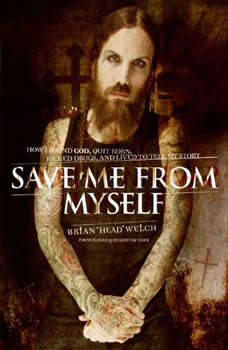 Save Me from Myself: How I Found God, Quit Korn, Kicked Drugs, and Lived to Tell My Story

The amazing true story of an outofcontrol rock star, his devastating addiction to drugs, and his miraculous redemption through Jesus Christ In February 2005, more than ten thousand people in Bakersfield, California, watched as Brian Head Welchthe former lead guitarist of the controversial rock band Kornwas saved by Jesus Christ. The event set off a media frenzy as observers from around the world sought to understand what led this rock star out of the darkness and into the light. Now, in this courageous memoir, Head talks for the first time about his shocking embrace of God and the tumultuous decade that led him into the arms of Jesus Christ. Offering a backstage pass to his time with Korn, Head tells the inside story of his years in the band and explains how his rock star lifestyle resulted in an allconsuming addiction to methamphetamine. Writing openly about the tour bus mayhem of Ozzfest and the Family Values Tour, he provides a candid look at how the routine of recording, traveling, and partying placed him in a cycle of addiction that he could not break on his own. Speaking honestly about his addiction, Head details his struggles with the drug that ultimately led him to seek a higher power. Despite his numerous attempts to free himself from meth, nothingnot even the birth of his daughtercould spur him to kick it for good. Here Head addresses how, with the help of God, he emerged from his dangerous lifestyle and found a path that was not only right for his daughter, it was right for him. Discussing the chaotic end to his time in Korn and how his newfound faith has influenced his relationship with his daughter, his life, and his music, Head describes the challenging but rewarding events of previous years, exposing the truth about how his moments of doubt and his hardships have only deepened his faith. Candid, compelling, and inspirational, Save Me from Myself is a rock n roll journey unlike any other.