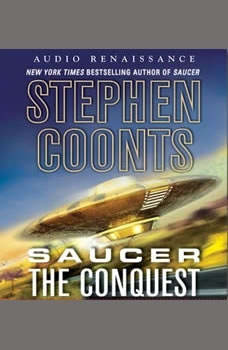 The long awaited sequel to master storyteller Stephen Coonts's Saucer brings back the characters, action and exhilaration that made the original a smashAfter discovering the secrets of a 140,000-year-old spacecraft in Saucer, Rip Cantrell and beautiful test pilot Charley Pine think their days of high-flying extraterrestrial adventure are over. But when Pine takes up flying spaceplanes to the moon for the French lunar base project, she discovers that the project director has installed a world-threatening antigravity beam. The French kidnap Rip's Uncle Egg and force him to fly a saucer, hidden in Area 51, to the moon. Rip and Charley have no choice—to rescue Egg and save the world, they must steal the first saucer from its new home, the National Air and Space Museum, and hit the not-so-friendly skies again.Stephen Coonts's first Saucer was a smash-hit nationwide. Now the unlikely duo of Rip Cantrell and Charley Pine are back, so strap in and leave your passports behind as the fight for freedom on the new frontier begins.