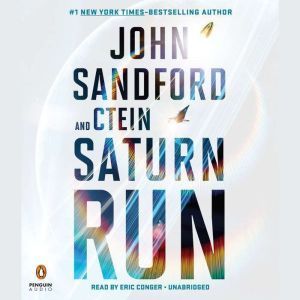 “Fans of Lucas Davenport and Virgil Flowers will eat this up.” --Stephen King

For fans of THE MARTIAN, an extraordinary new thriller of the future from #1 New York Times–bestselling and Pulitzer Prize–winning author John Sandford and internationally known photo-artist and science fiction aficionado Ctein.

Over the course of thirty-seven books, John Sandford has proven time and again his unmatchable talents for electrifying plots, rich characters, sly wit, and razor-sharp dialogue. Now, in collaboration with Ctein, he proves it all once more, in a stunning new thriller, a story as audacious as it is deeply satisfying.

The year is 2066. A Caltech intern inadvertently notices an anomaly from a space telescope—something is approaching Saturn, and decelerating. Space objects don’t decelerate. Spaceships do.

A flurry of top-level government meetings produces the inescapable conclusion: Whatever built that ship is at least one hundred years ahead in hard and soft technology, and whoever can get their hands on it exclusively and bring it back will have an advantage so large, no other nation can compete. A conclusion the Chinese definitely agree with when they find out.

The race is on, and an remarkable adventure begins—an epic tale of courage, treachery, resourcefulness, secrets, surprises, and astonishing human and technological discovery, as the members of a hastily thrown-together crew find their strength and wits tested against adversaries both of this earth and beyond. What happens is nothing like you expect—and everything you could want from one of the world’s greatest masters of suspense.