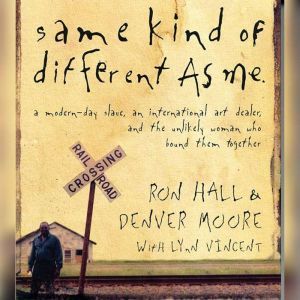 Same Kind of Different As Me: A Modern-Day Slave, an International Art Dealer, and the Unlikely Woman Who Bound Them Together

Read the critically acclaimed New York Times best-seller with more than one million copies in print. Same Kind of Different as Me was a major motion picture by Paramount in fall 2017.

Gritty with pain and betrayal and brutality, this true story also shines with an unexpected, life-changing love.

Meet Denver, raised under plantation-style slavery in Louisiana until he escaped the “Man” – in the 1960’s – by hopping a train. Non-trusting, uneducated, and violent, he spent another 18 years on the streets of Dallas and Fort Worth.

And the woman who changed their lives -- Miss Debbie: “The skinniest, nosiest, pushiest, woman I ever met, black or white.” She helped the homeless and gave of herself to all of “God’s People,” and had a way of knowing how to listen and helping others talk and be found – until cancer strikes.

Same Kind of Different as Me is a tale told in two unique voices – Ron Hall & Denver Moore – weaving two completely different life experiences into one common journey where both men learn “whether we is rich or poor or something in between this earth ain’t no final restin’ place. So in a way, we is all homeless-just workin’ our way toward home.”

The story takes a devastating twist when Deborah discovers she has cancer. Will Deborah live or die? Will Denver learn to trust a white man? Will Ron embrace his dying wife's vision to rescue Denver? Or will Denver be the one rescuing Ron? There's pain and laughter, doubt and tears, and in the end a triumphal story that readers will never forget.

Continue this story of friendship in What Difference Do It Make?: Stories of Hope and Healing, available now. Same Kind of Different as Me also is available in Spanish.