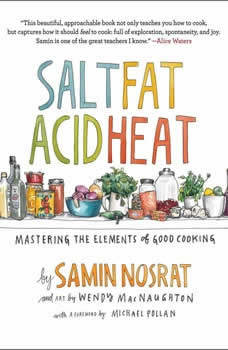 Now a Netflix series! Winner of the 2018 James Beard Award for Best General Cookbook and multiple ICAP Cookbook Awards Samin Nosrat reads “The Four Elements of Good Cooking,” Part One of her New York Times bestseller Salt, Fat, Acid, Heat: Mastering the Elements of Good Cooking A visionary new master class in cooking that distills decades of professional experience into just four simple elements, from the woman declared “America’s next great cooking teacher” by Alice Waters.In the tradition of The Joy of Cooking and How to Cook Everything comes Salt, Fat, Acid, Heat, an ambitious new approach to cooking by a major new culinary voice. Chef and writer Samin Nosrat has taught everyone from professional chefs to middle school kids to author Michael Pollan to cook using her revolutionary, yet simple, philosophy. Master the use of just four elements—Salt, which enhances flavor; Fat, which delivers flavor and generates texture; Acid, which balances flavor; and Heat, which ultimately determines the texture of food—and anything you cook will be delicious. By explaining the hows and whys of good cooking, Salt, Fat, Acid, Heat will teach and inspire a new generation of cooks how to confidently make better decisions in the kitchen and cook delicious meals with any ingredients, anywhere, at any time. Echoing Samin’s own journey from culinary novice to award-winning chef, Salt, Fat Acid, Heat immediately bridges the gap between home and professional kitchens. With a lighthearted approach to kitchen science, Samin demystifies the four elements of good cooking for everyone.

WANT TO LEARN OVER 165 EASY AND QUICK RECIPES WITH STEP BY STEP INSTRUCTIONS? DISCOVER DELICIOUS CROCKPOT, AIR FRYER AND SPIRALIZER RECIPES ALL IN ONE BOOK! Here Is A Preview Of Some Of The Crockpot Recipes You'll Learn... Egg and Sausage Casserol...

Back of the House
by Scott Haas

Food writer and clinical psychologist Scott Haas wanted to know what went on inside the mind of a top chef—and what kind of emotional dynamics drove the fast-paced, intense interactions inside a great restaurant. To capture all the heat and hu...

The Hip Chick's Guide to Macrobiotics
by Jessica Porter

Heralded by New York magazine as one of the city's most popular diets, macrobiotics has become the latest trend in dieting, thanks to high-profile supporters like Madonna and Gwyneth Paltrow. Speaking to the generation of young women looking to ext...

The Soul of a Chef
by Michael Ruhlman

In his second in-depth foray into the world of professional cooking, Michael Ruhlman journeys into the heart of the profession. Observing the rigorous Certified Master Chef exam at the Culinary Institute of America, the most influential cooking scho...

Are you looking for highly nutritious and tasty food within a few minutes without much effort? This Instant Pot Electric Pressure Cooker Cookbook contains mouthwatering and healthy recipes that are easy to prepare. This cookbook will show you ho...

Whetstone: The Complete Guide To Using A Knife Sharpening Stone; Learn How To Sharpen Your Knives And Achieve The Ultimate Japanese Blade Cut With The Waterstone Sharpener Technique
by Mark C. Johnson

If you want the highest quality knife blade you need to learn how to use a whetsone, the most effective Japanese way of sharpening knives is to maintain their edge crisp and sharp. Today only, get this audio bestseller for a special price. Whetsto...

The Art of Fermentation
by Sandor Ellix Katz

The Art of Fermentation is the most comprehensive guide to do-it-yourself home fermentation ever published. Sandor Ellix Katz presents the concepts and processes behind fermentation in ways that are simple enough to guide listeners through their fir...