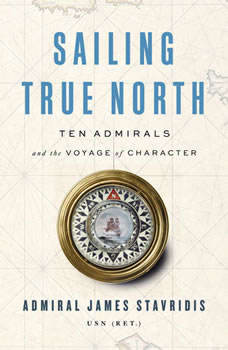 Sailing True North: Ten Admirals and the Voyage of Character

From one of the most distinguished admirals of our time and a former Supreme Allied Commander of NATO, a meditation on leadership and character refracted through the lives of ten of the most illustrious naval commanders in history

In his acclaimed book Sea Power, James Stavridis reckoned with the history and geopolitics of the world's great bodies of water. Now in Sailing True North, he offers a much more intimate, human accounting: the lessons of leadership and character contained in the lives and careers of history's most significant naval commanders. Admiral Stavridis brings a lifetime of reflection to bear on the subjects of his study--on naval history, on the vocation of the admiral with its special tests and challenges, and on the sweep of global geopolitics. Above all, this is a book that will help you navigate your own life's voyage: the voyage of leadership of course, but more important, the voyage of character. Sadly, evil men can be effective leaders sailing toward bad ends; ultimately, leadership without character is like a ship underway without a rudder. Sailing True North helps us find the right course to chart.

Simply as epic lives, the tales of these ten admirals offer up a collection of the greatest imaginable sea stories. Moreover, spanning 2,500 years from ancient Greece to the twenty-first century, Sailing True North is a book that offers a history of the world through the prism of our greatest naval leaders. None of the admirals in this volume were perfect, and some were deeply flawed. But from Themistocles, Drake, and Nelson to Nimitz, Rickover, and Hopper, important themes emerge, not least that there is an art to knowing when to listen to your shipmates and when to turn a blind eye; that serving your reputation is a poor substitute for serving your character; and that taking time to read and reflect is not a luxury, it's a necessity.

By putting us on personal terms with historic leaders in the maritime sphere he knows so well, James Stavridis has in Sailing True North offered a compass that can help us navigate the story of our own lives, wherever that voyage takes us.

In a work of extraordinary narrative power, filled with brilliant personalities and vivid scenes of dramatic action, Robert K. Massie, the Pulitzer Prize–winning author of Peter the Great, Nicholas and Alexandra, and Dreadnought, elevates to i...

This action-packed narrative history of destroyer-class ships begins with destroyers' first incarnation as torpedo boats in 1898 through the last true combat service of the ships in the Vietnam War. Nicknamed "tin cans" or "greyhounds," destroyers w...

A gripping, brilliantly told tale of the secret and deadly struggle between American national security and the kings of the oceans. At once thrilling and heartbreaking, this is a landmark book of deep, original reporting which could alter forever ho...

No espionage missions have been kept more secret than those involving American submarines. Now, Blind Man's Bluff shows for the first time how the Navy sent submarines wired with self-destruct charges into the heart of Soviet seas to tap crucial un...

In America's new war, the first guns in the fight are special operations forces, including the Navy SEALs, specially trained warriors who operate with precision, swiftness, and lethal force. In the constantly shifting war on terror, SEAL units&mdash...

From the New York Times bestselling author comes the definitive, illustrated history of one of the greatest battles ever fought—a riveting nonfiction chronicle published to commemorate the two-hundreth anniversary of Napoleon's last stand.On ...

Developed specifically for the Vietnam War (and made famous by the 2004 presidential campaign), Swift Boats were versatile craft "big enough to outrun anything they couldn't outfight" but too small to handle even a moderate ocean chop, too loud to s...

With The Last Stand of the Tin Can Sailors and Ship of Ghosts, James D. Hornfischer created essential and enduring narratives about America’s World War II Navy, works of unique immediacy distinguished by rich portraits of ordinary men in extre...