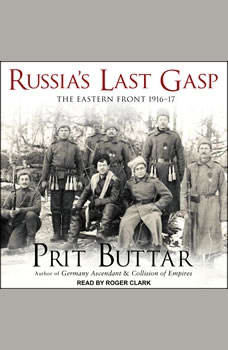 In Russia's Last Gasp, Prit Buttar looks at one of the bloodiest campaigns launched in the history of warfare—the Brusilov Offensive, sometimes known as the June Advance. With British, French, and German forces locked in a stalemate in the trenches of the Western Front, an attack was launched by the massed Russian armies to the east. The assault was intended to knock Austria-Hungary out of the war and divert German troops from the Western Front, easing the pressure on Russia's allies. Russia's dismal military performance in the preceding years was forgotten, as the Brusilov Offensive was quickly characterized by innovative tactics. Most impressive of all was the Russian use of shock troops, a strategy that German armies would later use to great effect in the final years of the war. Drawing on first-hand accounts and detailed archival research, Buttar gives a dramatic retelling of final years of the war on the Eastern Front, with the Russian Army claiming military success at a cost so high that it was never able to recover.