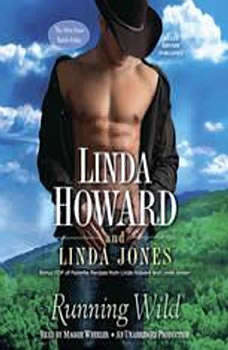 In book 1 of this steamy new contemporary Western romance series by two blockbuster authors, a cowboy and a woman on the run take a stand and fight for love.

Carlin Reed lives in fear, off the grid, moving from place to place. So Battle Ridge, Wyoming, a small town in the middle of nowhere, seems like a good place to lie low for a while. But after becoming cook and housekeeper to cattle rancher Zeke Decker, Carlin suspects that she’s made her first mistake. Rugged, sexy, and too distracting for his own good, Zeke is pure temptation mixed with something deep and primal that makes Carlin feel almost safe. Soon things are getting way too hot in the kitchen.

Zeke doesn’t challenge Carlin’s terms: cash, dead bolts, and no questions. It is easy to see that she’s a woman in trouble. Problem is, he’s so blindsided by his attraction to her he can’t think straight. Zeke tries to stay all business, no complications—but that game plan is sabotaged the second Carlin gets under his skin. And when her terrifying past follows her to the ranch, Carlin faces a heartbreaking choice: run away from the man she loves, or put him in the crosshairs of a madman.

Includes a bonus PDF of recipes from the book

A serial killer is hunting the Pacific Northwest, murdering victims in a gruesome and spectacular way. The local police suspect “monsters” are involved, and have called in Anita Blake and Edward, U.S. Marshals who really know their monst...

Envy As the son of a serial killer, homicide detective Thomas “Veck” DelVecchio, Jr., grew up in the shadow of evil. Now, on the knife-edge between civic duty and blind retribution, he atones for the sins of his father — while fig...

The early Anita Blake novels find new life in trade paperback-as perfect collectibles for long-time fans or as great ways for new readers to sink their teeth into the series.In The Laughing Corpse, a creature from beyond the grave is tearing a swath...

In the sixth adventure in the #1 New York Times bestselling series, Anita Blake’s unique skills make her a wanted woman—by vampire, by werewolf, and by a hit man...   Though she’s dating a vampire and a werewolf, Anita is keep...

Unabridged CDs, 15 CDs, 19 hours Read by Kimberly Alexis In Blue Moon, Anita Blake's ex, high school teacher and sexy lycanthrope Richard, has been thrown in jail for attempted rape. With an entourage of vampires and werewolves, even this preterna...

Son of No One
by Sherrilyn Kenyon

In Son of No One, next in the blockbuster The Dark-Hunters series by Sherrilyn Kenyon, it's not easy being life's own personal joke, but Josette Landry has made an unstable peace with the beast. Completely down on her luck, Josette takes a job with ...

Circus of the Damned
by Laurell K. Hamilton

First time in trade paperback: the third novel in the #1 New York Times bestselling series. In Circus of the Damned-now in trade paperback for the first time-a rogue master vampire hits town, and Anita gets caught in the middle of an undead turf wa...