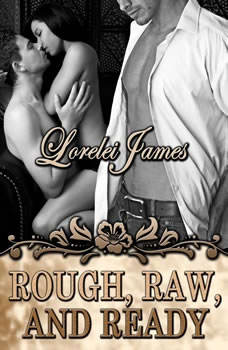 Chassie West Glanzer hasn't been a stranger to drama and tragedy. A year of wedded bliss to sexy-as-sin cowboy Trevor Glanzer has brought her the happiness and contentment she never thought she'd find, and mellowed Trevor's rodeo wanderlust. Then Trevor's old roping partner ambles up the driveway and Chassie's life changes drastically. Trevor never expected to see Edgard Mancuso again, after it became clear he couldn't be the man Edgard needed. Now Edgard is back from Brazil to sort out their tangled past, and Trevor is plagued with feelings he tought he'd buried over three years ago. Although Trevor is hat-over-bootheels in love with his sweet, feisty wife, the sense his life is missing a piece has always gnawed at him. Chassie's shock that Edgard and Trevor were once loves turns to fear of losing her husband. Or worse, fear that Trevor will stay with her only out of a sense of duty. Yet as the three of them spend time together, the sins of the past blur and fade, leaving raw emtion and unbridled passion. Passion that could heal - or cause irreparable damage to their future. Warning: this book contains unbelievably explicit sex, including multiple cowboy/cowgirl/cowboy menage scenes, juicy, hot male on male action, a bucketful of politically incorrect situations, and true Western ideology.

Changing the Game
by Jaci Burton

Win at any cost. That's always been the mantra of sports agent Liz Darnell. When she carries things too far and risks losing her number-one client, baseball pro Gavin Riley, Liz realizes that she'll have to work extra innings to win him back. It mig...