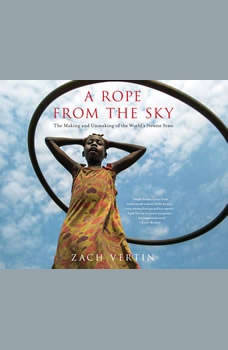 Rope from the Sky, A: The Making and Unmaking of the World's Newest State

The birth of South Sudan was celebrated the world round?a triumph for global justice and the end of one of the worlds most devastating wars. The Republics historic independence was acclaimed not only by its long-oppressed people but also by three U.S. presidents and the legions of Americans who championed their cause. But the celebration would not last: South Sudans freedom-fighters soon plunged their new nation back into chaos, shattering the promise of liberation and exposing the hubris of their American backers. Drawing on extraordinary personal stories of identity, liberation, and survival, this narrative tells an epic story of paradise won and then lost. Zach Vertins firsthand accounts from deadly war zones to the halls of Washington power bring listeners on an extraordinary journey into the rise and fall of the worlds newest state. South Sudans untold story is a unique episode in global history?an unprecedented experiment in international state-building?and a cautionary tale. A Rope from the Sky is propelled by characters both inspired and ordinarytheir aspirations are matched by insecurities, their sins by courage and kindness. It is first a story of hope, power, greed, compassion, and conscience-shocking violence from the worlds most neglected patch of territory. But it is also a story about the best and worst of America: both our big-hearted ideals and our difficult reckoning with the limits of American power amid a world in disarray.

David Lamb, critically-acclaimed author of The Arabs, spent four years in Africa as a news correspondent, traveling through 48 of its countries. Written in 1983, The Africans is a remarkable and very personal commentary on the people of this vast co...

The classic work of political, economic, and historical analysis, powerfully introduced by Angela Davis. In his short life, the Guyanese intellectual Walter Rodney emerged as one of the leading thinkers and activists of the anticolonial revolution,...

This rollicking and panoramic history of Casablanca during the Second World War sheds light on the city as a key hub for European and American powers, and a place where spies, soldiers, and political agents exchanged secrets and vied for control. ...

The Boer War
by Martin Bossenbroek

The Anglo-Boer War (1899-1902) is one of the most intriguing conflicts of modern history. It has been labeled many things: the first media war, a precursor of the First and Second World Wars, the originator of apartheid. The difference in status and...

The Black Nile
by Dan Morrison

Carthage Must Be Destroyed
by Richard Miles

An epic history of a doomed civilization and a lost empire. The devastating struggle to the death between the Carthaginians and the Romans was one of the defining dramas of the ancient world. In an epic series of land and sea battles, both sides c...

There Was a Country
by Chinua Achebe

From the legendary author of Things Fall Apart comes a longawaited memoir about coming of age with a fragile new nation, then watching it torn asunder in a tragic civil warThe defining experience of Chinua Achebe’s life was the Nigerian civil...

In the late 1890s, Edmund Dene Morel, a young British shipping company agent, noticed something strange about the cargoes of his company’s ships as they arrived from and departed for the Congo, Leopold II’s vast new African colony. Incom...

A gripping work of reportage that, for the first time, tells the story of "Chucky" Taylor, a young American who lost his soul in Liberia, the country where his African father was a ruthless warlord and dictator. Chucky Taylor was in many ways an ave...