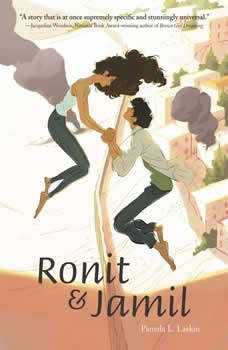 Pamela L. Laskin’s beautiful and lyrical novel in verse delivers a fresh and captivating retelling of Shakespeare’s Romeo and Juliet that transports the star-crossed lovers to the modern-day Israel-Palestine conflict.Ronit, an Israeli girl, lives on one side of the fence. Jamil, a Palestinian boy, lives on the other side. Only miles apart but separated by generations of conflict—much more than just the concrete blockade between them. Their fathers, however, work in a distrusting but mutually beneficial business arrangement, a relationship that brings Ronit and Jamil together. And lightning strikes. The kind of lightning that transcends barrier fences, war, and hatred.The teenage lovers fall desperately into the throes of forbidden love, one that would create an irreparable rift between their families if it were discovered. But a love this big can only be kept secret for so long. Ronit and Jamil must face the fateful choice to save their lives or their loves, as it may not be possible to save both.

Swede escape! Calista Swanson has begun her study abroad semester in Stockholm, Sweden, and she couldn’t be happier! There’s finally some distance between her and the constant piano-playing of her annoying sister Suzanne. Calista and Suz...

Welcome to the world of the fabulously wealthy in London, 1909, where dresses and houses are overwhelmingly opulent, social class means everything, and women are taught to be nothing more than wives and mothers. Into this world comes seventeen-year-...