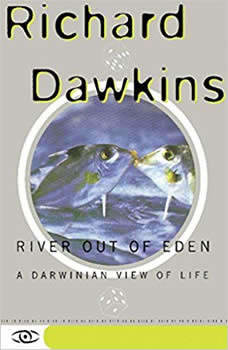 River Out of Eden: A Darwinian View of Life

How did the replication bomb we call "life" begin and where in the world, or rather, in the universe, is it heading? Writing with characteristic wit and an ability to clarify complex phenomena (the New York Times described his style as "the sort of science writing that makes the reader feel like a genius"), Richard Dawkins confronts this ancient mystery. Nearly a century and a half after Charles Darwin formulated it, the theory of evolution is still the subject of considerable debate. Oxford scientist Richard Dawkins is among Darwin's chief defenders, and an able one indeed-- witty, literate, capable of turning a beautiful phrase. Narrators: Richard Dawkins, Lalla Ward

River Out of Eden: A Darwinian View...
Science Masters