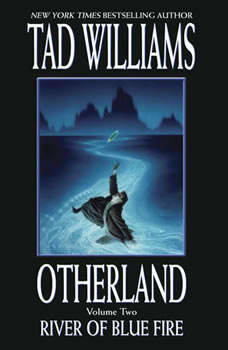 From the New York Times–bestselling author comes the second entry in the popular Otherland series.

A small band of adventurers has penetrated the veil of secrecy that prevents the uninitiated from entering Otherland. But having broken into the amazing worlds within worlds that make up this universe, they are trapped, unable to escape back to their own flesh-and-blood bodies in the real world. And as dangers and circumstances split their party into small, widely scattered groups, their only hope of reuniting lies in returning again and again to the River that flows—in one form or another—through all the worlds.

But the odds seem to be completely against them as they—and the one outsider with whom they might join forces—become hopelessly lost in realms where an Ice Age tribe’s fears can only be quenched in blood . . . where insects are as large and deadly as dinosaurs . . . where they are caught in the war between a man made of straw and one made of tin . . . where cartoon ads take on a life of their own . . . where humans strive to survive in the aftermath of an alien invasion . . . and where one among their party is actually The Grail Brotherhood’s most terrifying weapon—a sociopathic killer who has never failed and whose current mission is to make certain that not even one member of this little invasion force lives long enough to reveal the truth about Otherland to the people of Earth.