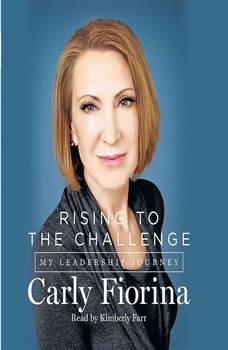 Rising to the Challenge: My Leadership Journey

Since the 2006 publication of her New York Times bestseller, Tough Choices, former Hewlett-Packard CEO Carly Fiorina has faced a new round of challenges. She ran for the Senate as a Republican in deep-blue California but was unable to unseat the entrenched incumbent. She battled breast cancer, wondering if she’d even survive. Worst of all, she suffered the devastating loss of a beloved daughter. Yet despite these setbacks and tragedies, she remains undaunted: “I’ve come to see lessons and blessings in these passages. I know now that life is not measured in time. Life is measured in love and positive contributions and moments of grace.”

Now, Fiorina shares the lessons she’s learned from both her difficulties and triumphs. Drawing on her experience as a pioneering business and nonprofit leader, a politically active citizen, and a parent, she diagnoses the largest problem facing our country today: untapped potential. Too often, American men and women are held back by systems that prevent them from working and flourishing. Too many people lose hope for themselves. Too many lack the opportunity to use their gifts and live lives of meaning, dignity, and purpose.

In 2014, Fiorina launched the Unlocking Potential Project, a new grassroots organization, to share a message with those who worry about America’s future: we have all the resources we need to prosper, but we don’t tap into them. By ignoring conservative principles—or failing to articulate those principles in ways that connect with regular people—politicians have failed their constituents, abandoning them to the crushing burden of our bloated government.

Fiorina believes that politics, like business, is primarily about people. With warmth and compassion, she provides a vision that reaches across the usual barriers of gender, race, income, and party affiliation to craft a message that appeals to a wide range of Americans: a message of hope. As she learned facing life’s challenges, “Hope is a curiously strong thing.” Her story—and her ideas—will restore hope to those discouraged about the future.