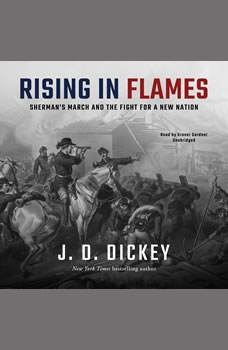 Rising in Flames: Shermans March and the Fight for a New Nation

A New York Times bestselling historian sheds new light on Shermans epic March to the Sea, especially the soldiers, doctors, nurses, and civilians who would change the nation for the better.America in the antebellum years was a deeply troubled country, divided by partisan gridlock and ideological warfare, angry voices in the streets and the statehouses, furious clashes over race and immigration, and a growing chasm between immense wealth and desperate poverty.The Civil War that followed brought America to the brink of self-destruction. But it also created a new country from the ruins of the old one?bolder and stronger than ever. No event in the war was more destructive, or more important, than William Shermans legendary march through Georgia?crippling the heart of the Souths economy, freeing thousands of slaves, and marking the beginning of a new era.This invasion not only quelled the Confederate forces, but transformed America, forcing it to reckon with a century of injustice. Dickey reveals the story of women actively involved in the military campaign and later, in civilian networks. African-Americans took active roles as soldiers, builders, and activists. Rich with despair and hope, brutality and compassion, Rising in Flames tells the dramatic story of the Unions invasion of the Confederacy, and how this colossal struggle helped create a new nation from the embers of the Old South.