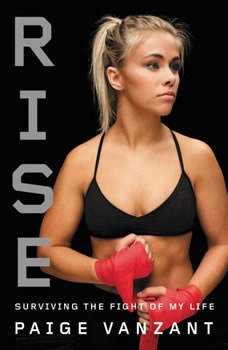 Rise: Surviving the Fight of My Life

AN INSPIRING MEMOIR FOR ANYONE WHO'S BEEN KNOCKED DOWN AND CAME UP SWINGINGAs a young girl growing up in Newberg, Oregon, Paige Sletten was all energy and full of potential. A natural athlete, Paige excelled at dancing, made the cheerleading squad earlier than most, and even had aspirations of becoming a Disney child star. With a tight-knit family, Paige's life was on track for greatness. Then, one fateful fall night in high school, everything changed when Paige faced a life-threatening sexual assault. It was in the gym where she "pounded the life out of those ashen memories," becoming stronger with every punch, kick, and lunge. In this beautiful tale of survival, she writes: I inhale the power. I exhale the bullshit. One strike at a time.Fighting became Paige's safe haven; something to live for, and Rise is the inspiring story of how she ultimately transformed into a bone-breaking, head-smashing fighter known as Paige VanZant. It is the deeply moving story of a warrior who transformed her pain into power and has become one of the toughest women in the world; an inspiring journey of someone who was knocked down in the most devastating way and came up swinging.

The Warrior Diet
by Ori Hofmekler

Blood in the Cage
by L. Jon Wertheim

Can I See your Hands
by Dr. Gav Schneider

The Way of the Fight
by Georges St-Pierre