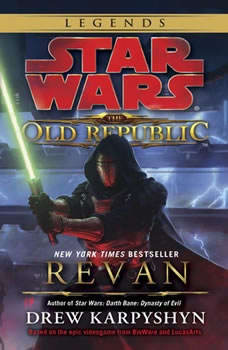 There’s something out there:
a juggernaut of evil bearing down to crush the Republic—
unless one lone Jedi, shunned and reviled, can stop it.

Revan: hero, traitor, conqueror, villain, savior. A Jedi who left Coruscant to defeat Mandalorians—and returned a disciple of the dark side, bent on destroying the Republic. The Jedi Council gave Revan his life back, but the price of redemption was high. His memories have been erased. All that’s left are nightmares—and deep, abiding fear.

What exactly happened beyond the Outer Rim? Revan can’t quite remember, yet can’t entirely forget. Somehow he stumbled across a terrible secret that threatens the very existence of the Republic. With no idea what it is, or how to stop it, Revan may very well fail, for he’s never faced a more powerful and diabolic enemy. But only death can stop him from trying.

NEW YORK TIMES BESTSELLER • Journey to Star Wars: The Force Awakens  “Star Wars: Aftermath [reveals] what happened after the events of 1983’s Return of the Jedi. It turns out, there’s more than just the Empire for th...