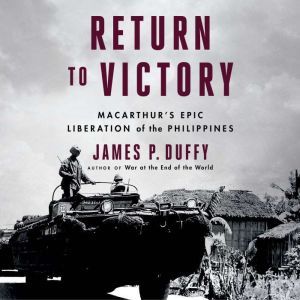 Return to Victory: MacArthur's Epic Liberation of the Philippines

“I shall return,” General Douglas MacArthur promised the Filipino people following the Japanese invasion and occupation of the Philippines in spring 1942. The people there believed MacArthur’s vow—and even Americans were stirred by his dramatic pledge. Now, two and half years later, MacArthur was ready to fulfill his promise--the liberation of the Philippines was about to begin.

It would not be an easy campaign. The more than 7,000 islands of the Philippine archipelago were the key to taking down the Japanese Empire—and the Imperial forces were prepared to sacrifice every man and every ship to prevent MacArthur from regaining control of them.

Covering both the strategic and tactical aspects of the campaign through the participation of its soldiers, sailors, and airmen, as well as its commanders, James P. Duffy leads readers through a vivid account of the nearly year-long, bloody campaign to defeat over a quarter million die-hard Japanese defenders in the Pacific theater. Return to Victory is a wide-ranging, dramatic and stirring account of MacArthur’s epic liberation of the Philippines.