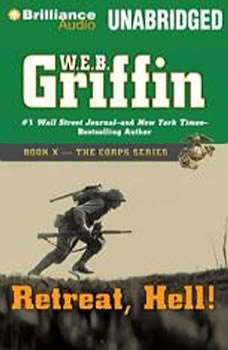 It is the fall of 1950. The Marines have made a pivotal breakthrough at Inchon, but a roller coaster awaits them. The bit in his teeth, Douglas MacArthur is intent on surging across the 38th parallel toward the Yalu River, where he is certain no Chinese are waiting for him, while Major Ken McCoy, operating undercover, hears a different story entirely, and is just as intent on nailing down the truth before it is too late. Meanwhile, Brigadier General Fleming Pickering, shuttling between two continents, works desperately to mediate the escalating battle between MacArthur and President Harry Truman, while trying to keep his mind from the cold fact that somewhere out there, his own daredevil pilot son, Pick, is lost behind enemy lines - and may be lost forever. Before Retreat, Hell! is finished, all their fates will be determined - and for some of them, it will be a bitter pill indeed.