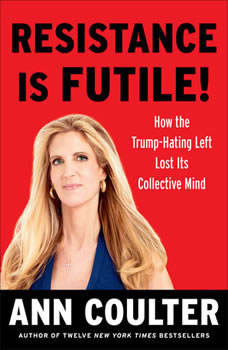 Resistance Is Futile!: How the Trump-Hating Left Lost Its Collective Mind

Ann Coulter is the #1 New York Times bestselling author of If Democrats Had Any Brains, They’d Be Republicans; Godless; How to Talk to a Liberal (If You Must); Treason; Slander; and High Crimes and Misdemeanors. She is the legal correspondent for Human Events and a syndicated columnist for Universal Press Syndicate. A graduate of Cornell University and University of Michigan Law School, she clerked for the Honorable Pasco Bowman II of the U.S. Court of Appeals for the Eighth Circuit, worked for the Senate Judiciary Committee, and served as a litigator with the Center for Individual Rights, a public interest law firm. Her weekly column can be read at anncoulter.com.