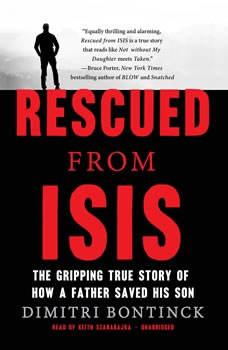 Rescued from ISIS: The Gripping True Story of How a Father Saved His Son

The inspiring and terrifying tale of one mans journey to the Middle East to save his child from radical IslamDimitri Bontinck lived every parents worst nightmare: his teenage son, introduced to Islam by his girlfriend, fell into the clutches of a radical mosque. Dimitri watched helplessly as his son Jay transformed from a gentle boy to a soldier in training, wearing traditional robes and following a strict diet. Completely brainwashed, Jay snuck out of the house and traveled to Syria, all but vanishing. Too late, Dimitri learned that their country, Belgium, was the leading hotbed of Islamic radicalization. Large numbers of teenagers were being lured into this world and expertly indoctrinated into radical Islam. One by one, they disappeared into the Middle East, most never to be seen again.With no one to help him, Dimitria white, Christian-raised atheistset off on his own to save his son. Using only his military training, a lot of courage, and a little luck, he gradually made contacts in the Middle East and, after months of searching, was able to find his son and bring him home. The world was shocked at his unprecedented success, and he started receiving pleas from families around the world, asking that he get their children back, as well. Increasingly fearful for his own life but unable to ignore these cries for help, Dimitri accepted his newfound role as the jihadi hunter.