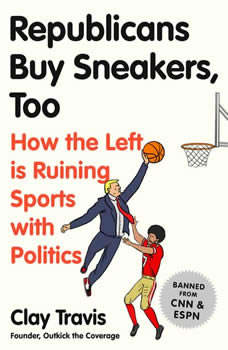 Republicans Buy Sneakers Too: How the Left Is Ruining Sports with Politics

Sports media superstar Clay Travis wants to save sports from the social justice warriors seeking to turn them into another political battleground.Have you ever tuned into your favorite sports highlights show, only to find the talking heads yammering about the newest Trump tweets or what an athlete thinks about the second amendment? The way Clay Travis sees it, sports are barely about sports anymore. Whether it’s in the stadium or the studio, the conversation isn’t about who’s talented and who stinks. It’s about who said the right or wrong thing from the sidelines or on social media. And we know which side is playing referee in that game.Having ruined journalism and Hollywood, far left-wing activists have now turned to sports. Travis argues it’s time for right-thinking fans everywhere to put down their beers and reclaim their teams and their traditions. In Republicans Buy Sneakers, Too he replays the arguments he’s won and lays out all the battles ahead. His goal is simple: to make sports great again. Travis wants sports to remain the great equalizer and ultimate meritocracy—a passion that unites Americans of all races, genders, and creeds, providing an opportunity to find common ground and an escape from polarizing commentary. He takes readers through the recent politicization of sports, controversy by controversy and untalented-but-celebrated hero by hero, and skewers outlets like ESPN which spend more time mimicking MSNBC than covering sports.Travis hopes that if we can stop sports from being just another political battlefield, and return it to our common ground, we can come together as a country again.