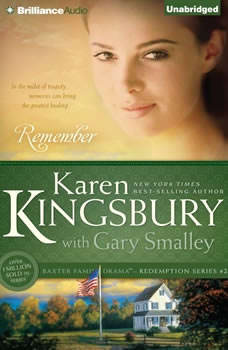 Winner of Christian Retailing’s 2005 Retailer’s Choice Award for Best SeriesA deep regret....Though Ashley vowed to start a new life when she came back from Paris, the mistakes she made there continue to haunt her. She has locked up her heart, convinced that no one—including God—could forgive her. But four unlikely people—Alzheimer’s patients—find the cracks in Ashley’s heart and slowly help her heal.An unthinkable tragedy....Then comes the nightmare of September 11, which forever changes the lives of the Baxter family, causing them to remember what is important and leading them to make decisions that are both heartbreaking and hope-filled.A steadfast love....Landon Blake has loved Ashley since he was a teenager, but the heartache of her past has convinced her she’ll never be able to love again. Landon tries to dull the pain of her rejection by immersing himself in the rescue efforts at Ground Zero. Will a new opportunity in New York keep him apart from Ashley forever?A story about tragedy, healing, and the importance of remembering.