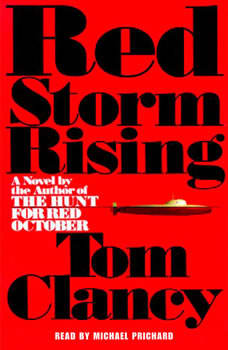 When Muslim fundamentalists blow up a key Soviet oil complex, making an already critical oil shortage calamitous, the Russians figure they are going to have to take things into their own hands. They plan to seize the Persian Gulf, and more ambitiously, to neutralize NATO. Thus begins Red Storm, an audacious gamble that uses diplomatic maneuver to cloak a crash military build-up. When Soviet tanks begin to roll, the West is caught off guard. What looks like a thrust turns into an all-out shooting war, possibly the climactic battle for control of the globe.

It is very early in Jack Ryan’s career—so early that he has not yet even become an analyst for the CIA. But a series of nasty encounters with an IRA splinter group has brought Ryan to the attention of the CIA’s Deputy Director and ...

When Moslem fundamentalists blow up a key Soviet oil complex, making an already critical oil shortage calamitous, the Russians figure they are going to have to take things into their own hands. They plan to seize the Persian Gulf, and more ambitious...

Ring of Fire
by Brad Taylor

Tom Clancy returns to Jack Ryan’s early days, in an extraordinary novel of global political drama.“Smart and likable, Jack Ryan has become one of the best-knowncharacters in contemporary American fiction.” –The Washington Po...

A man named Mohammed sits in a café in Vienna, about to propose a deal to a Colombian. Mohammed has a strong network of agents and sympathizers throughout Europe and the Middle East, and the Colombian has an equally strong drug network througho...

Debt of Honor
by Tom Clancy

Clancy plunges hero Jack Ryan into nonstop high adventure, as two seemingly unrelated occurrences being a chain of events that will stun the world.From the Compact Disc edition.

The sensational killings that have rocked San Francisco appear to be unrelated except in their brutality. But detective Lindsay Boxer senses there's some thread connecting them all. She calls her friends in the Women's Murder Club together to see i...

etective Lindsay Boxer is jogging along a beautiful San Francisco street when a fiery explosion rips through the neighborhood. A town house owned by an Internet millionaire is immediately engulfed in flames, and when Lindsay plunges inside to searc...